A Titillating Conversation About Equality 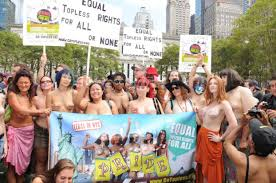 Today marks the eighth annual nationwide "Go Topless Day.| Women around the country are baring their breasts in a show of solidarity for gender equality.

As long as men are allowed to be topless in public, women should have the same constitutional right. â?¦

Men fought for their rights to be bare chested in public back in the 1930's and won! It is time for women to achieve the same RIGHTS. Skin is skin.

Under Minnesota state law, and Minneapolis city ordinance, it is a misdemeanor offense for women to go topless in public. There is no such law on the books for men. Such disparate treatment is a legitimate constitutional issue; the Fourteenth Amendment prohibits discrimination on the basis of gender.

Individuals on both sides of this issue are gathering at 4 p.m., at Gold Medal Park in Minneapolis, for what is sure to be a titillating conversation about gender equality and constitutional rights.

All guffaws aside, here at Ramsay Law Firm, we take the Constitution seriously. We would gratefully accept the opportunity to provide pro bono representation to any women arrested at today's event for asserting their constitutional right to gender equality.