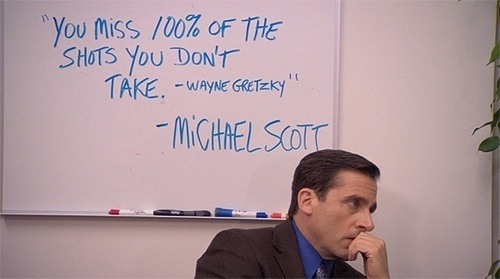 If you ever watched the American version of The Office, your poor brain is probably overloaded with funny and memorable quotes from the office manager, Michael Scott. One in particular stands out in my mind, the one memorialized by the picture leading this blog post.

This week, the Court of Appeals issued a decision worth highlighting, even though it is only slightly related to DWI law. The decision itself was pretty straightforward in a legal sense; the majority (2 judges from the 3 judge panel) upheld the district court's decision to send a guy to prison for violating the conditions of his probation.

One judge dissented, and he led his dissent with a quote from Charles Dickens that cuts right to the heart of why this case was so troubling.

"Dollars! All their cares, hopes, joys, affections, virtues, and associations, seemed to be melted down into dollars . . . . Men were weighted by their dollars, measures gauged by their dollars; life was auctioneered, appraised, put up, and knocked down for its dollars."

Chief Judge Cleary's dissent is this case struck an open nerve; the case itself (you can read it here if you'd like) ultimately resulted in a man being sent to prison for years, for no other reason than the fact that he is homeless and unemployed. You see, Mr. Brown needed to pay a couple of hundred dollars to get into a treatment program, and would then have to pay $42 for each treatment session. That's a tall order for someone without a permanent address, or employment.

Mr. Brown's probation officer recommended he try selling plasma to come up with some extra funds, or risk being sent back to prison. One judge noted that while Mr. Brown had "good intentions" that his failure to "come up with a way to get some minimal money to do what he needed to do" indicated an inexcusable inability to "act on those intentions."

We see this frequently in the criminal justice system; offenders who need treatment (for sexual offense, or for addiction, or for anger management issues) who are instead shoveled into the prison system because, for some difficult-to-understand reason, we'd rather spend money building prisons than treating the underlying problem. And while even the richest of people can suffer from addiction, and need treatment far more than they need to add to our ever-bloating rank of prisoners, the simple fact is that diseases like addiction hit the homeless, the mentally ill, and the unemployed the hardest.

Mr. Brown was "weighted by his dollars" and two Court of Appeals judges deemed him lacking. Given the standard of review for decisions of these nature (a complicated topic that I won't go into here) the decision to agree that Mr. Brown needed to spend years in prison instead of in treatment is more of a symptom of the flaws in our criminal justice system than the actual cause . . . . but that does not make it any less troubling. One judge that reviewed this case not only found the perfect quote to summarize what was going on, but rose to the challenge and did not see fit to "measure Mr. Brown's life based on his dollars."

I'm not making any intentional (or unintentional) comparisons between our Court of Appeals and the sitcom The Office; that was just a funny intro that leads to my final point: From here on out, I'm attributing that Dickens quote cited above to Chief Judge Cleary . . . . and I don't think I'm the only attorney that will do so. I hope that everyone in the criminal justice system reads it, and takes it to heart, because prisons are expensive -- and not just in dollars.