Bernard Appeal May Be Heard By Full Supreme Court 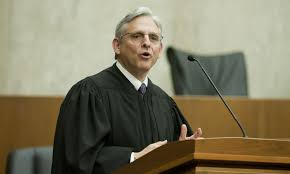 For those of you who don't know, oral arguments in the case of State v. Bernard (where the United States Supreme Court will determine whether Minnesota's DWI Test refusal law is constitutional) are scheduled for April 20, 2016.

That's a little over a month from now; since we filed our briefs, the Court was rocked by the death of one of its most staunch protectors of the Fourth Amendment, Antonin Scalia. But today, President Obama officially announced his nominee to replace Justice Scalia -- Chief Judge Merrick Garland of the District of Columbia Court of Appeals.

Anyone paying attention already knows that Republican Senators have vowed to withhold approval of anyone President Obama nominates, which lead most of those involved in the Bernard case to expect the final decision to come from 8, not 9, justices . . . meaning a chance of a "split decision" that provides no guidance (for the record, I personally don't believe that's a realistic possibility).

But now things are interesting -- Judge Garland appears to be the type of nominee that would be very palatable to Senate Republicans -- he's already been approved by the Senate before (when appointed to the D.C. circuit), and Senator Orrin Hatch (a high ranking member of the Senate Judicial Committee) has repeatedly noted that Garland would make a fine "consensus nominee" since as early as 2010.

It might not be likely that Judge Garland will be appointed in less than a month (and there is the chance he might not be appointed at all) but President Obama appears to have picked a nominee with an eye towards a speedy and relatively non-partisan approval process.

What the addition of Justice Garland to the Supreme Court might do to the eventual outcome of the Bernard case is, of course, a subject for another blog. But for now, whether the Court consists of 8 or 9 members, all we currently know is that oral arguments are scheduled for April 20, and we are still expecting a decision in June of this year.