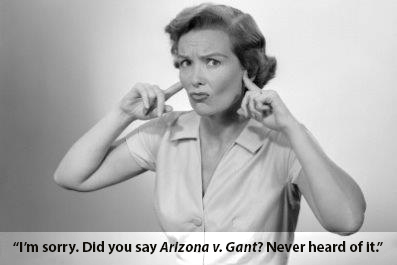 There's a particularly . . . odd . . . legal rumor going around, a rumor that is just plain false. The strange claim is being made that under existing precedent, the search incident to lawful arrest exception to the warrant requirement applies to chemical tests in the DWI context. For those familiar with the topic, this logic was the basis for the holding in the recent case of State v. Bernard. In that case, the Minnesota Supreme Court effectively created an entirely new exception to the traditional warrant requirement in DWI cases, repurposing the logic that applies when an officer searches for weapons to apply to the search for incriminating blood alcohol evidence.

What is surprisingâ??the salacious rumor going around, which we're going to nip in the bud right hereâ??is that the Bernard decision is somehow a natural extension of preexisting law, and not a radical departure from what we've come to expect in terms of Constitutional protections.

The legal fact of the matter is that the Bernard majority's holding is an unprecedented expansion of the quite clearly-defined scope of the search incident to arrest exception. Bernard is not only contrary to well-established federal law, but flies right in the face of the very case it's trying to side-step â?? the Missouri v. McNeely decision from 2013. The Bernard majority basically concedes this in its opinion: "our research has not revealed a single case anywhere in the country that holds that a warrantless breath test is not permissible under the search-incident-to-a-valid-arrest exception.|

Is that the type of logic that supports a radical new definition of the Constitution? Or does it make more sense to conclude that the absence of evidence is not the same as evidence of absence? For example, our research has not revealed a single case that holds that a warrantless colonoscopy is not permissible under the search incident to a valid arrest exception. Does that mean that it clearly follows that law enforcement can begin inspecting everyone's colon after a lawful arrest? Is that how we make law now?

That's what's troubling about the current legal landscape â?? Bernard created a new exception, and now prosecutors are trying to cement that exception into the minds of judges before it gets overturned by the United States Supreme Court. Neither justification for the search incident to arrest exception â?? officer safety, or the preservation of physical, destructible evidence â?? is present in the DWI context. Police perform a search incident to arrest, to make sure the arrestee has no weapons or destructible evidence on his person, when they initiate the arrest and take the suspect into custody. The arrest ends when the suspect is secured in a squad car. From that point on, the suspect has no weapons, and is incapable of destroying evidence of driving while impaired. It really is that simple.

By using |traditional case analysis methods,| coupled with science, we arrive at the same legal result.

Alcohol causes impairment only after it has been absorbed into the bloodstream. (Science)

The natural dissipation of alcohol in the blood is not a per se exception to the warrant requirement. (McNeely)

It is impossible for an individual to destroy evidence of alcohol already absorbed into his or her bloodstream â?? the metabolic process is entirely out of the control of the person who is impaired. (Science)

Minnesota law enforcement officers receive training on how to get a search warrant. (Rule 6700.0300)

Search warrants can be obtained via telephone in a matter of minutes. (Rule 36.01)

There are only two justifications for the search incident to lawful arrest exception: protecting police and the public by removing weapons, and preventing the destruction of tangible, destructible evidence. (Gant)

One of these two justifications must be present for the search incident to arrest exception to apply. (Gant)

Police perform a search incident to arrest, to make sure a suspect has no weapons or destructible evidence on his or her person, when they take a suspect into custody. (Gant)

Legally, a search incident to arrest must occur contemporaneously with the arrest. (Gant)

The police must observe a DWI suspect for a minimum of 15 minutes after the arrest before conducting a breath test. (Science)

Therefore, a breath test for alcohol concentration is not, legally or temporally, a search incident to arrest under clearly-established federal law.

Now, this is all a fun logic game . . . but then again, it's also entirely unnecessary. After all, Missouri v. McNeely (the case that Bernard seeks to side step) already made it crystal clear that this |search incident to arrest| exception carries no weight in the DWI context:

Because â??[s]earch warrants are ordinarily required for searches of dwellings,' we reasoned that â??absent an emergency, no less could be required where intrusions into the human body are concerned,' even when the search was conducted following a lawful arrest * * * * We have never retreated, however, from our recognition that any compelled intrusion into the human body implicates significant, constitutionally protected privacy interests.

If someone tries to blind you with a wall of text, bad logic, or selective citation to authorityâ??be especially wary of reliance on old law, and dissenting, i.e., minority, opinionsâ??it is merely an attempt to convince you that this |search incident to arrest| exception is more than just a passing fancy. Ask them to explain the language from McNeely (quoted above) and then walk them through the 12-point |traditional case method analysis| listed above that. Trust us, they'll be sputtering by the end.