A Tale of Two Source Codes

In the early 2000s, citizens of Minnesota began reaching out to me, telling me about their unfair treatment by the State’s breath alcohol machine. They told me about how despite their best effort to provide a breath into the State’s machine, they were charged with a crime - a refusal to provide sufficient breath into the machine.

You see, in the State of Minnesota, it is a crime to refuse to take an official breath test at the police station (but you should refuse to take the roadside breath test). My clients had taken the official test, but the State’s machine was broken, and labeling citizens criminals because of it.

I began digging into the issue on behalf of my clients and the citizens of MN. Through my investigations, I discovered that the State had known about the problems with their breath alcohol machine, but was persuaded by the Attorney General’s office not to fix the problem. The state scientists admitted to such malfeasance in phone calls, emails, and testimony in court.

The breath alcohol technicians allowed the science to be polluted by lawyers at the Department of Public Safety who wanted more convictions.

In the end, the State’s own memo from the breath lab made a tacit admission that the machine was broken.

It’s deja vu, all over again

I began noticing anomalies with the State’s new breath test machine, the DMT. When I pointed out the anomalies to the state scientists, the same story started to play out again. They resorted to denial, cover-up, and collusion.

The difference this time is that the State has a contractual obligations to get the source code. It was written into its contract with the manufacturer of the new breath machine. 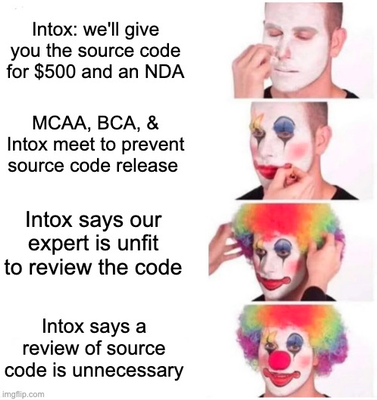 In an effort to suppress the release of the source code, the State quickly moved to hold a secret meeting between the MCAA, BCA, and Intoximeters. No one from the defense bar was notified or invited to the meeting. I was only able to discover info about the meeting from reading emails obtained through a MN Data Practice Request.

At this point, the State continues to try to suppress the release of the source code. They’d rather bury their heads in the sand than take an honest look at the code.

I’ll keep you posted on what happens next.

Follow me on LinkedIn for updates on the fly.