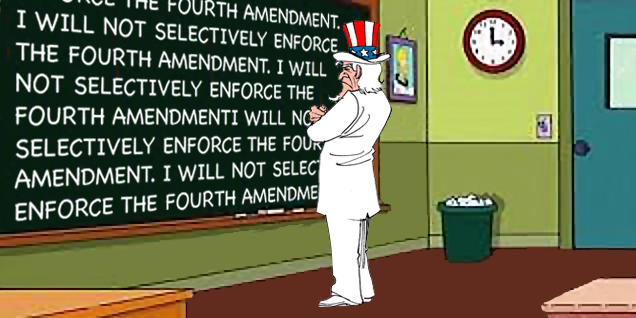 The Eighth Circuit Court of Appeals just ruled that it is a-ok to arrest someone, haul her off to jail, and tell her:

We want evidence of the crime we think you committed, and we're not getting a warrant. You submit to a blood draw right now, or you're committing a new crime. If you don't let us stick you and test the blood, you're going down for the crime we arrested you for and the more serious crime of not giving us blood. So, what'll it be?

How is that constitutional? "Consent to search| is a judicially-created (and judicially-defined) exception to the Fourth Amendment of the Constitution. Apparently, in the 8th Circuit, whether an individual actually, voluntarily consents to a blood draw is irrelevant. Through some mysterious legal alchemy, by reading the Minnesota Implied Consent Advisory to a DWI suspect, the act of submission to a blood draw becomes |consent| to a warrantless search.

In other words, in the 8th Circuit, Fourth Amendment protection varies, based on the alleged offense. In the DWI context, submission is consent, and the court decides when a warrantless blood draw is reasonable. Chief Judge Riley "confirmed" that

society's judgment [is] that blood tests do not constitute an unduly extensive imposition on an individual's privacy and bodily integrity.

Really? I must've missed that Gallup poll. And the Supreme Court must've missed it too, because in 2013, in Missouri v. McNeely, the Court wrote that the

compelled physical intrusion beneath [the driver's] skin and into his veins to obtain a sample of his blood for use as evidence in a criminal investigation [is] an invasion of bodily integrity [that] implicates an individual's |most personal and deep-rooted expectations of privacy."

The real question at issue is whether the |search[ ]| was truly |unreasonable.|

No, the real question is:

Why is every branch of Minnesota government fighting so hard to find a way around the Constitution? GET A WARRANT.

And, there is a silver lining. This ruling brings us much closer to the inevitable constitutional correction the U.S. Supreme Court will make. The 8th Circuit just made a great case for granting certiorari in State v. Bernard.