Not Your Grandma’s Recipe for Acetone!

When you think of science, you don't think of scientists following recipes handed down from one generation to the next by word of mouth. No! Science is about taking measurements, keeping careful records, and following evidence-based, validated procedures.

But the kind of science that's been going on at the Minnesota BCA breath alcohol lab is more in line with following grandma's favorite recipe. Actually, it's worse. At least grandma wrote down her recipes. The BCA doesn't even bother to do that.

In testimony given by the BCA's breath alcohol scientists last week in court, I was amazed to discover that the BCA did not have any formal procedure for preparing their acetone solutions.

This was an incredible admission. 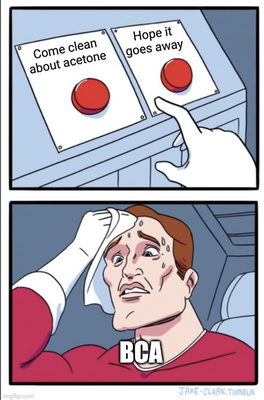 According to the BCA’s own documents, acetone, “may be present in the breath of diabetics, dieters or highly exercised individuals.”

On an annual basis, the BCA is supposed to test an acetone solution on the DMT to ensure it can flag for acetone. It is one of the quality controls to ensure MN drivers don’t have their breath alcohol score inflated for simply following a ketogenic diet, exercising, or being a diabetic.

This is a major black eye for the breath alcohol lab. It has now been over 10 years that the BCA has not been properly making its acetone solutions. Instead, they were simply following recipes handed down by word of mouth.

Lax standards are nothing new in breath alcohol testing.

It reminds me of the problems faced at the St. Paul Crime Lab several years back. Their lack of standards forced the lab to cease work for several years.

I applaud the BCA for being forthright in admitting their mistake. It seems that they've recently formalized a new procedure for making their acetone solutions. Whether or not they've done it correctly is still up for debate.

It’s astounding that such an important quality control was missing from their process.

Stay tuned, there is much more to explore on this front.