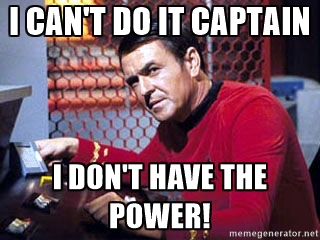 There are some things each of us simply cannot do. We all know the famous saying: I just can't do it, Captain, I don't have the power!

All joking aside, the issue of physical inability is a serious topic in DWI cases. When someone is arrested for DWI and asked to give a breath test, the testing machine (DMT) requires 1.5 Liters of air at a flow rate of at least 3.0 Liters per minute. To help picture this, think of a 2 Liter bottle of cola. The amount of air required fills 75% of that bottle. Now, most of us can physically provide this much air (albeit with some difficulty); however, some have physical limitations that make providing this amount of air very difficult and potentially even dangerous. The problem is that when these circumstances have arisen, many officers are blindly charging drivers with test refusals, claiming the driver refused the test by their conduct (gaming the test).

These charges completely ignore the driver's physical inability and can be defeated. Just last week we got our client her license back because we convinced a judge that she did not refuse the test, but instead was physically unable to give enough air. The facts are fairly straight-forward: our client continually attempted to give breath samples but the DMT read each sample as "deficient," meaning not enough air was provided. Based on this, the officer charged our client with DWI refusal even though he was aware our client had a long history of lung issues.

This was simply not right. We challenged the taking of the license and took the case to court. We provided the judge with our client's medical records that showed her lung capacity is much less than the national average. In fact, her spirometry test showed her lungs could only hold about 1.5 Liters of air. Knowing this fact, the BCA's forensic scientist even admitted that if our client had provided the required 1.5 Liters of air her lungs may have collapsed. We also showed the judge that each breath sample was the exact same amount of air making it unlikely that our client was gaming the DMT; it would be virtually impossible to intentionally give the exact same amount of air with each breath unless that was all the air her lungs could expel.

The state's main rebuttal came from the police officer who said it appeared to him that our client purposefully blew around the mouthpiece, so she must have been tampering with the test.

The judge was not convinced in light of the evidence and ruled in our favor, stating: "the consistencies throughout these two tests does not suggest [our client] manipulated the test as asserted by the officer, but instead made a good-faith effort to complete the DMT." Because an alternative test was not offered, our client was given her license back and we are now in the process of defending the criminal case where we will assert the same defense.

The physical inability defense needs to be well understood in the defense community. In the last few months we have been successful on two of these cases thanks to developing strong supporting evidence. We know there are more cases like this out there and they need to be challenged as well.