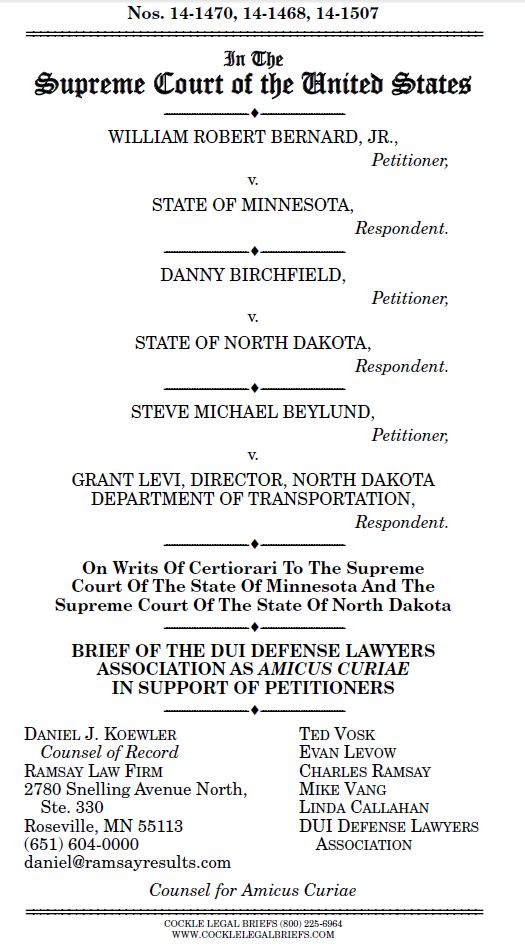 The briefs in support of the Appellants (Bernard, Birchfield, and Beylund) have already been filed, as have the briefs filed by several amicus curiae ("Friends of the Court," attorneys love using Latin phrases).

Respondents (the States of Minnesota and North Dakota) along with their fellow amici will be filing their briefs between March 15 and March 22.

We expect oral arguments to be held in Washington, D.C. sometime in April.

We expect a decision in June.

And of course, there is one new question . . . what will be the impact of the recent passing of Justice Scalia on the cases scheduled for this term?

We'll be releasing the briefs filed in these cases over the course of the next week or so. Along with the three "merits" briefs, four amicus briefs were filed. Locally, the Minnesota Society for Criminal Justice and the Minnesota Association of Criminal Defense Attorneys (MSCJ/MACDL) filed an amicus brief. Nationally, they were joined by the DUI Defense Lawyers Association (DUIDLA), the National College for DUI Defense (NCDD) the Downsize DC Foundation, and the American Civil Liberties Union (ACLU) (note that Dan Koewler was the author of the DUIDLA brief).

Here are the "merits" briefs:

Check back often, we'll be posting the rest of the amicus briefs soon (along with some analysis)