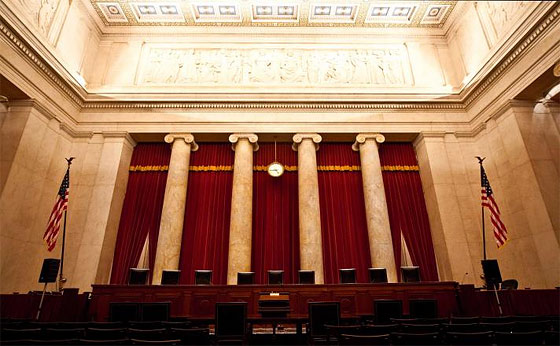 It's been several hours since I walked out of the lower level of the United States Supreme Court and back out onto the sunlit National Mall (and even longer since I first started standing in the "Bar Member Only| line to get a front-row seat to the arguments) and after having a little time to collect my thoughts, I'm ready to give my impressions on how the arguments went ... and give my prediction on what the final outcome of the case will be.

The issue presented is fairly straightforward: Can the government make it a crime to refuse to submit to a warrantless search in a DWI investigation. The secondary question is |should there be a different standard for breath tests versus blood tests?| When the Court issues its decision this spring, I expect both answers to be |no,| and I'll go into the reasons why below.

For starters, there was a shocking undertone to the whole argument that was only cleared up 2/3 of the way through the discussion. For most of the argument, the justices were all under the impression that |DWI breath test| meant |roadside preliminary breath test.| The fact (which eventually came to light) is that there are almost always two breath tests in every DWI arrest â?? a roadside preliminary test, inadmissible in court, to determine if the driver should be arrested, and then a second, evidentiary test, taken at the police station and used in court to try and convict the driver of actually breaking the law.

With that in mind, the argument takes a very different tone, and you could almost see the Justices shift gears once they realized which breath test was actually at issue (Justice Kagan actually admitted as much out loud). The Justices started by discussing the level of intrusiveness of a breath test versus a blood test, and prompted responses from both parties about whether |implied consent| to a breath test is enough, or whether the Court could (or should) demand something along the lines of an actual written contract from all drivers in order to ensure "implied| consent was |actual| consent (which, of course, begs the question of what to do if that consent is later withdrawn, but I digress).

The Court homed in very quickly on the heart of the matter; Justice Breyer, taking the lead for most of the questioning, succinctly pointed out that if breath tests were protected searches, the defense would win; if they were not protected, the State had more freedom to penalize the act of refusal.

But then the fireworks started. The Justices took turns relentlessly demanding that the State provide practical, factual reasons why a warrant could not be obtained, sometimes talking over one another (and the government attorneys) in an attempt to get a straight answer.

To the best of my recollection, no answer was ever actually provided.

Justice Breyer, Justice Kagan, and Justice Sotomayor each independently raised particular emphasis on the |drastic| and |extraordinary| demands that were being made by the State. With very pointed questions, all three Justices were all but begging the State to give a reason why the Court should craft what would be, in effect, a brand new exception to a 250 year old document that was specifically designed to place a neutral judge between the actions of law enforcement and the rights of private citizens. The Court's hypotheticals focused on the ability to obtain warrants in 15 minutes, before the arrested driver would have even arrived at the police station, and why the warrant process even needed to be tampered with when there appeared to be no good reason to do so.

That appeared to be the turning point of the argument â?? when the Justices were discussing PBTs, their questions focused on the |less intrusive| nature of breath tests. Once they realized these tests are conducted at the police station, on drivers that were already placed under arrest, the questions about |intrusiveness| faded away and the Court zeroed in on the practicalities of the situation. At several points the questions generated laughter (Justice Alito interrupted at one point to clarify to the State's attorney that Justice Sotomayor's previous question was simply assuming that the State had already lost the case and was just looking to gauge how the State would react!)

In the end, the theme of the argument became clear: a majority of the Court wants to continue with the current |theme| of recent decisions and emphasize that law enforcement must use the warrant process whenever practicable. With discussions of things like a smartphone |warrant app| with a big red |W| button for law enforcement to push at need, to comments about rural judges just waiting by the phone, hoping for a phone call, the Court appeared to be inclined to use the Bernard case as a vehicle to remind the nation of just how crucial the warrant process is to the criminal investigation process â?? especially in light of recent technological advances that make the warrant process more pain-free than ever.

The question of civil consequences for test refusal (license revocations and plate impoundments) went largely unaddressed, but the few questions that were raised on that point make it appear that the Court may be willing to approve of administrative penalties for test refusal. But with respect to criminal penalties, it looks as though both blood and breath tests are not going to be granted any special status under the Constitution, and will still be protected by the warrant requirement.

My prediction? The Court will rule 6-2 in favor of the defense in Bernard, striking down Minnesota's criminal DWI test refusal law, with a dissent from Justice Thomas and Justice Alito. Whether increased license revocations for test refusal will remain constitutional is a very different question, however, and I honestly don't want to hazard a guess at this point.

But even my 6-2 prediction is simple guesswork, not legal advice. It's based on my knowledge of the issues and my impressions of the questions asked during oral arguments (you may view the transcript here). Luckily, we'll have our answer soon (likely in early June) and then we'll all go back to work interpreting whatever decision the Supreme Court gives us in the case of Minnesota v. Bernard. Until then, we'll all just have to be patient.