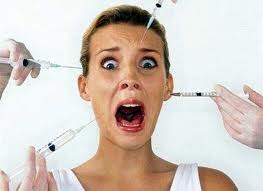 Many believe we need to tighten our impaired driving laws for both drunk driving and people who abuse prescription drugs and narcotics. But have we gone too far?

Yesterday we told you about a situation where our client, who slid off the road during a winter storm, ended up getting repeatedly stuck with a needle by several cops at a police station, all in a failed attempt to draw his blood and "prove| that he was impaired. As we said, the scary part is that it is all legal.

Historically, Minnesota law permitted only select health care professionals (specifically, |a physician, medical technician, emergency medical technician-paramedic, registered nurse, medical technologist, medical laboratory technician, phlebotomist, laboratory assistant|) to withdraw blood for DWI purposes. And this portion of the DWI law made sense. These professionals worked in labs and hospitals, making it likely that any blood draw would be performed by people who were both highly qualified, and worked in a sterile environment.

But then, on July 1, 2010, for no particularly good reason, the Legislature changed the Implied Consent Law, and permitted nearly anyone to draw blood â?? including the cops themselves. The only requirement is that a |qualified person| draw the blood. Although the law defines |qualified person| as |medical personnel trained in a licensed hospital or educational institution to withdraw blood,| the statute omits minimum training requirements, standards, or qualifications of the instructors who provide the training; and says nothing about where or under what conditions the blood may be taken. Meanwhile, and unsurprisingly, cops, prosecutors and even judges seem willing to overlook the |medical personnel| requirement in the already watered-down statute. Worse yet, the Legislature passed some additional language ensuring that the, |person drawing blood at the request of a peace officer ... is in no manner liable in any civil or criminal action except for negligence in drawing the blood.|

When this bill was signed into law in early 2010, we were alarmed and predicted this type of police behavior. Later that year we sadly reported that police had already begun to take advantage of the law:

Minnesota peace officers are now being given a 40 hour course that will supposedly |qualify| them to perform blood draws. That's 8 hours of online training, and 32 hours of |lab exercises| before they can begin sticking needles into Minnesota drivers. Forty hours of training, versus obtaining a certification that can take years . . .

Even more alarming is that police are |excited| about their new found power to go vein hunting with needles back at the station. Minnesota State Patrol Sergeant Don Marose, expressed his exhilaration with the new law, while discussing how circumventing hospitals' pesky safeguards would save them time and money:

This is an exciting new program for Minnesota law enforcement and should prove beneficial to reducing incidents of DWI. It is also an efficient use of resources that both reduces the cost of collecting evidence and reduces the time required to obtain a blood sample, thereby providing the blood test closer to the time of driving. With officers receiving the same training as medical personnel who draw blood, it will be done in a safe manner.

So, without any judicial oversight, an officer on the scene of a driver that is merely suspected of being impaired (and merely having bloodshot, watery eyes is enough to meet that threshold) can be treated like a human pin cushion by an officer with a needle, at the station or even by the roadside. Sound like a situation out of 1984 or Darkness at Noon? Would our courts stand for such a situation?

Schmerber and subsequent decisions have firmly established that the offender does not have a right to refuse chemical testing and that non-consensual testing does not violate the Constitution. In recent years, the Minnesota Supreme Court has drawn a bright line rule that the natural dissipation of alcohol creates a |single factor exigent circumstance| and a test can be obtained without consent and without a search warrant. State vs. Shriner, 751 N.W.2d 538 (Minn. 2008); State vs. Netland, 762 N.W.2d 202 (Minn. 2009).

That's right. Citizens are required to submit to bumbling needle stabbing under penalty of law. If they refuse, they can be charged with a crime more severe than taking and failing the test. They face a minimum mandatory bail of $12,000, a year in jail, $3,000 fine and a license revocation up to 12 times longer than for a standard first-time DWI.

Luckily, Minnesota courts are not always the last word on legal protections and legal rights â?? there is always the United States Supreme Court. Be sure to check out our next blog about how the McNeely decision could trump Minnesota's procedures, laws, and appellate court decisions on this frightening issue.