Crossing the Line - What Happened to Innocent Until Proven Guilty? 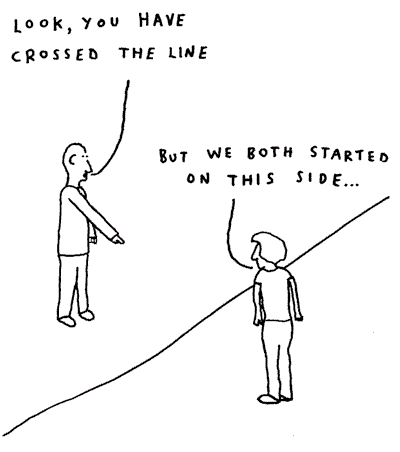 How many times did you cross the line on your drive to work today?

I hope it was fewer than three, because that's all it took to initiate the traffic stop that has turned my client's life upside-down.

Like many of our clients, "Terry| was pulled over for imperfect driving.

During the officer's investigation of the triple line crossing, he noticed a smell of alcohol. Terry admitted that he had consumed alcohol earlier in the day.

(It's not illegalâ??yetâ??to drive after drinking. You can have a glass of wine at dinner, or a couple beers during an afternoon football game, and then drive home, as long as you are not impaired, and your blood alcohol concentration is lower than 0.08. Bar and restaurant owners' livelihoods depend on it.)

Officer: |Will you take a PBT test?|

Officer: |I am placing you under arrest for misdemeanor driving while impairedâ?¦.|

On went the cuffs, and off they went to the police station.

The officer didn't give Terry a Miranda warning; he gave him a Minnesota DWI warning instead: I arrested you for DWI, so you have to take a test, because it's a crime to do anything else.

Terry didn't take the test. The officer charged him with DWI and Test Refusal and threw him in jail.

Test refusal is a gross misdemeanor, so Terry had two options: post $12,000 bail, or agree to the State's conditions of release, including at least bi-weekly random urinalysis (at $15 per test).

Terry didn't have a spare $12k lying around, and he needed to get back to work, so he accepted the conditions.

Terry drives almost an hour to and from work, each way. Terry paid $680 out-of-pocket to have his license reinstated so that he could pay for installation and monitoring of the Ignition Interlock device in his car.

Terry's UAs and breath tests have all been alcohol-free.

The prosecutor objected. |The State has no relationship with the Ignition Interlock device vendor. I can't subpoena an out-of-state vendor to enforce the violation if he blows a positive test. I've already litigated this issue. I need random UAs so I can prove in court that he's been drinking.|

The judge denied our request.

All of thisâ??the UAs, the Ignition Interlock, the attorney's fees, the unpaid time off work for court appearances and urinalysisâ??is a pretty heavy burden for someone who is innocent until and unless he is proven guilty.

Especially since Terry's "crime" is that he didn't give blood, breath, or urine after a police officer arrested him for crossing the line three times with beer on his breath.