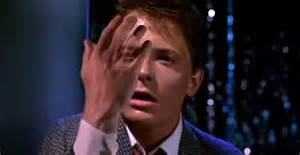 Marty McFly was almost a goner. Because he had altered the past, his future father and mother were not going to fall in love, and if they didn't fall in love, Marty would have never been born. As his fate came closer to being sealed, he literally started to disappear (thank you 80's special effects). Most are familiar with this story from the 1985 movie "Back to the Future.|

It used to be the law in Minnesota that a driver could be charged for refusing a blood, urine, or breath test after being read the Minnesota Implied Consent Advisory. However, this is no longer true in situations of blood and urine tests.

We recently argued a case at the Minnesota Court of Appeals that involved a warrantless blood test. We argued our client's license revocation should be rescinded (taken back) because our client was told refusing the blood test was a crime, which is a false statement.

There are prior cases from Minnesota's highest court which say that when an officer tells a driver refusal is or may be a crime, and that statement is untrue, the driver's due process rights have been violated. The court also held the correct remedy for this violation is to rescind the license revocation.

We simply asked the court to apply this rule of law and acknowledge the false information our client received. However, the Minnesota Court of Appeals declined to do so. Their reasoning is that |the statement was true at the time it was read| (the incident occurred before the appellate decisions were issued) and therefore, no rights were violated.

This is where our |Back to the Future| reference applies. You see, one of the main jobs of the courts is to interpret and apply the Constitution. When a court interprets the Constitution and finds a criminal statute infringes on constitutional rights, the law is thrown out. And when a law is thrown out as unconstitutional, it is as if the law never existed (also referred to as retroactive application). This closely mirrors the very scenario Marty found himself in: had his parents not fallen in love at the dance, Marty would have slipped into nonexistence and life would have gone on as if he was never born. For our purposes, just think of Marty as an unconstitutional law.

We recently argued this same issue again at the Court of Appeals and we will provide updates as these challenges develop.

Where to next? What is our next big issue? All I can say for now is "where we're going, we don't need roads." (Sorry, I couldn't help myself).